We travelled down to Pembrokeshire on the Monday for several days diving some of the many and varied dive sites that the South Wales coast has to offer.
Sheltered coves and inlets are abundant and relatively unexplored. There are a multitude of wrecks, reefs, drop-offs and exhilarating drift dives - diving to suit every experience and taste. 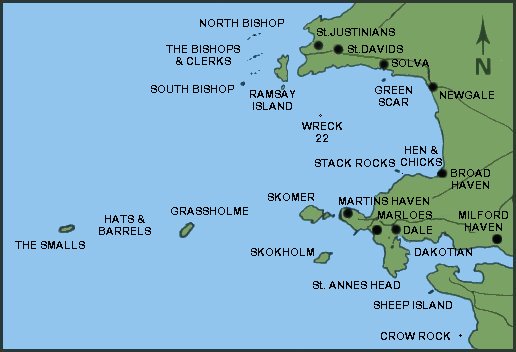 We were diving with Dive In2 Pembrokeshire on the Overdale, a 10.6 metre 'Bruce Roberts Offshore', which has a wide and roomy working space on aft deck to take twelve divers, a wide and roomy enclosed cabin/ Wheelhouse with Good visibility all round and a Forrard area below decks with twin bunks, Galley with Gas cooker and a Toilet WC.

Brian the dive skipper met up with us on the Monday evening to give us an overview of the week ahead and where the boat would pick us up.
The boat is moored at Neyland harbour but we were to be picked up at the jetty at Milford Marina. Free parking too!

Tuesday
A not-so-early start took us to the marina at Milford where we were to pick up the Overdale at 10am. The first dive to be the Lucy,

The lucy is 450-ton two-hold Dutch coaster. This 168ft long vessel sank in 1967 with a cargo of calcium carbide (used in making acetylene gas). Having struck Cable Rock in the middle of Jack Sound on Valentine's Day, the 7-man crew and one Collie dog promptly abandoned ship to avoid the results of the sea water/calcium carbide cocktail they had produced.

Down the buoy line to the bow at 34m, the ship is upright on a fairly even keel and very intact. Moving aft, it is possible to swim from the fore deck down either of two sets of lightly overgrown steps to the main deck.

Here, the two forward holds are full to their hatch beams with the now useless cargo although difficult to distingush being covered in marine life. Swimming past the holds, the superstructure, containing the crews quarters, bridge, and engine room, rises two deck levels above the main deck. It was here we encountered a friendly seal that was hiding in the bridge.
The aft deck rails, at a depth of 26m, are festooned with pastel-shaded plumose anemones which, if you are lucky, are fully blossomed out, and feeding.
As the Lucy is a small coaster, it is perfectly sized for the depth and viz so it is possible to appreciate the classic ship lines.

The second dive was a choice of High Point or the slate wreck both located just to the north of Milford Haven.
The Slate wreck is a recent discovery made by Len Bateman of Dive Pembrokeshire in 1998. There were some large pieces of slate, about a few hundred in all. The slate lies on the edge of a large reef dropping down to 20 metres.

High point is classed as a wall dive. The second small bay around from Martins Haven, heading east, there are some interesting gullies and small caves under the kelp at 8m. There were large boulders and a sandy bottom. We were told there was a chance of seeing octopus here but alas we saw none.

Wednesday
This morning the wind was starting to pick up and the dive site was chosen to be a wreck reportedly to have shells on it.
Once out of the shelter of the Haven there was quite a swell. A bumpy ride ensued to the dive site which was quite exposed.
The stand-in skipper for the day, Brian had other commitments, said all was fine for the dive to go ahead as he had seen weather much worse.
Myself and Sean were the first in the water but because of the rocky ride during kitting up and feeling a little green around the gills I had forgotten to put on trim weights so was unable to sink - a godsend as it turned out as trying to get back in the boat was tricky to say the least so the diving was called off at that point.
Several others were also starting to look decidedly green so we headed to calmer waters.
After bacon butties and a deliberation it was decided that due to the less than calm sea, diving for the day would be suspended so we spent the rest of the day with a trip to Tenby.

Thursday
It is very rare for a boat to be unable to launch and diving to take place in Pembrokeshire , but unfortunately Thursday was one of those rare days. Winds reaching force five were battering the coastline. Plan B was for the boat to meet us at Martins Haven where the sea was calmer but the swell prevented it. Some of the party decided to head home whilst the rest of us decided to travel over to Martins Haven anyway to sample what was described as one the best shore dives in the UK.

A secluded rocky little cove, sheltered from the southerly winds. And it certainly was! The sea in the cove was calm. A very good shore dive, with depths going down to 20m.
The beach is reached via a concrete track down from the car park. The rocks can be quite slippery, and care must be taken at low water. Cars however must be parked at the top of the hill in the NT car park. Toilets are nearby, and the home of the Skomer reserve is situated in a building on the way down to the cove. A shop selling NT goods, and details of Skomer are sold at the top near the car park.

On the left hand corner of the bay the sides drop to over 20 metres. On the right hand side there is another wall dropping to around 15 metres, just as pretty as the other wall but with more fish. Large spider crabs can be seen in the kelp as you swim out to the corners of the bay.

You've got a good memory Ian

When I saw the post I thought it was an ad for a dive this season (hint!) It feels like this one was years ago. It was a good few days, even though the weather wasn't kind to us.

Here's photo evidence of the seal on the Lucy, albeit not very clear:

Also, just to prove that I was suitably inspired by Liz's Cumbrae Critters talk, I was intrigued by this wee beastie and also the honeycomb pattern on the kelp (sorry, I obviously didn't take enough notice to remember what the white honeycomb stuff is called!):

By the way, you neglected to mention the visit to Mr Sheridan's birthplace and the very nice cream tea in Tenby.
Top

Slate wreck, a recent discovery made by Len Bateman for dive Pembrokeshire in 1998, This is just out from Martins Haven, this is close to the high point dive, there where some large pieces of slate was found, about a few hundred in all. The slate lies on an edge of a large reef dropping down to 20 metres.

High point, this is a wall dive this is a nice area to explore, this drop off to 20 metres, there was lots of sea life to look.
Top

Thanks for the info which has now been included into the report.
Top
Post Reply
4 posts • Page 1 of 1